Nikos Kazantzakis: A tribute to a legend 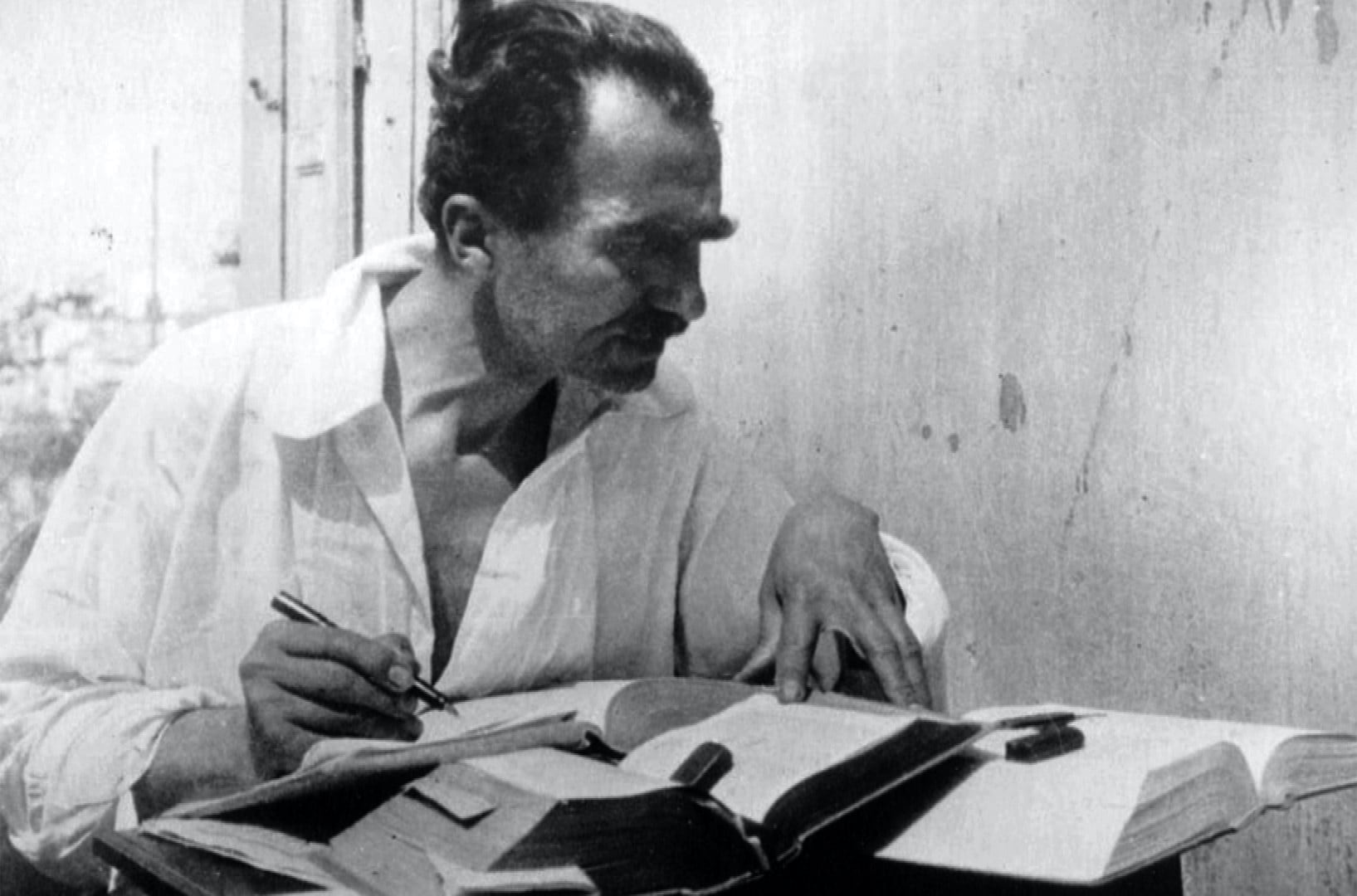 “I felt once more how simple and frugal a thing is happiness: a glass of wine, a roast chestnut, a wretched little brazier, the sound of the sea. Nothing else.” Zorba the Greek, Nikos Kazantzakis.

A poet, author and philosopher, Cretan born Nikos Kazantzakis is one of Greece’s most emblematic literary figures, with a fascinating life story to boot. When travelling to Crete it is well worth considering taking a day off the beaches or the historical sites, to venture inland to the village of Myrtia, 15 km from Heraklion: Quaintness factor aside, this historical hamlet, is also  the home of an exemplary literary museum dedicated to the life and work of arguably the world’s best-known Modern Greek writer.

Nikos Kazantzakis was born in Heraklion in the 1880’s when the island was still under Ottoman rule. His relationship with his father, Captain Michalis, a domineering, austere figure, marked him for life. Plagued by metaphysical and existential questions from an early age, he sought answers in the writings of Nietzsche and Bergson, and the philosophies of Christianity, Marxism and Buddhism. In attempting to explain the notion of God and Human, he even fled to a monastery for six months. He went on to study law in Athens and philosophy in Paris. As an ardent traveller, he worked as a translator and newspaper correspondent, among other things. He started writing in his 20’s and engaged with a variety of genres, from poetry, to travel literature and philosophy. However, he became famous mainly for his prose, during the last years of his life. This is when he published his most emblematic works: Zorba the Greek, Freedom and Death, The Greek Passion (Christ is Recrucified), the autobiographical Report to Greco and the Last Temptation of Christ. With societal norms and mores being considerably less tolerant in 1955 when it first came out, the latter caused quite a stir in the ecclesiastical circles. The Greek Orthodox Church actually excommunicated its author, and for this reason, he was not allowed to be buried in a cemetery when he died of leukemia two years later, in 1957. Instead his grave, as per his will, is located on the Martinengo Bastion of the Venetian walls outside of his hometown. The tomb is plain and adorned with a wooden cross and an inscription: I hope for nothing. I fear nothing. I am free. This phrase is nowadays found in far-flung and often unexpected places all around the globe.

Nikos Kazantzakis indeed received worldwide acclaim, not only thanks to his novel Zorba the Greek which was transformed into one of the most influential movies ever made for Greece and Greek culture, in 1964. Nominated for the Nobel Prize in Literature in nine different years, he is also the recipient of the International Peace Award in Vienna in 1956, while his works have been translated into over thirty languages, and continue to resonate with readers all over the globe.

Paying tribute to the lasting relevance of the great Cretan’s word, the homonymous museum in the historical village of Myrtia or Varvaroi, is located at the site of the former home of the Anemoyiannis family. They were related to Nikos Kazantzakis‘ father, Captain Michalis and in 1983, their descendant, the prominent set and costume designer Yiorgos Anemoyiannis, set out to create a museum in honour of the author’s memory and lifetime achievements. This undertaking was made possible with the considerable contribution of Eleni, Kazantzakis’ second wife and great love.

In 2009, the museum was thoroughly renovated. With its sophisticated design and aesthetic, it was nominated for the “European Museum of the Year” award in 2012. The exhibition includes rare audio-visual material, the author’s travel souvenirs, manuscripts, diaries and personal correspondence with major thinkers, politicians and writers of his time; first editions in Greek and other languages; art pieces inspired by his labours and many other personal items that showcase his work and personality. Complementing the permanent exhibition, the museum also hosts a variety of cultural events and festivals, especially in the summer, that give insights to particular aspects of Nikos Kazantzakis’ work. An intellectual and cultural hub, attracting visitors from the four corners of the planet, it makes for a fascinating, off the beaten path day trip in Crete. After your museum tour, take a stroll at the village to admire the traditional architecture and surrounding nature. Don’t forget to pay attention to the street names: they are all named after the author’s literary characters, the titles of his books, his inspirations, the places he visited and the people he met!

But this is just a sample of the many, fascinating things to do on your visit to Crete. Stay tuned for more tips and insights on our Europeo Cars Blog. Should you want to take it all in, however, do note that distances can be quite lengthy on this island. So the best way to experience its many beauties and delights is by your private means of transportation. Pick your vehicle of choice from Europeo Crete car hire, and our large collection of economy small cars, medium & large cars, jeeps, minibuses, station wagons, minivans and automatics. A well-established company which has been providing car rentals in Crete since 1990, with guaranteed low prices, stellar customer service, Europeo offers a vast choice of Crete Car Rent to suit different preferences, party sizes and budget considerations. Just contact us and start exploring Crete’s four-season wonderland!