Travelling to Matala and Komos with Europeo Crete Car Rent 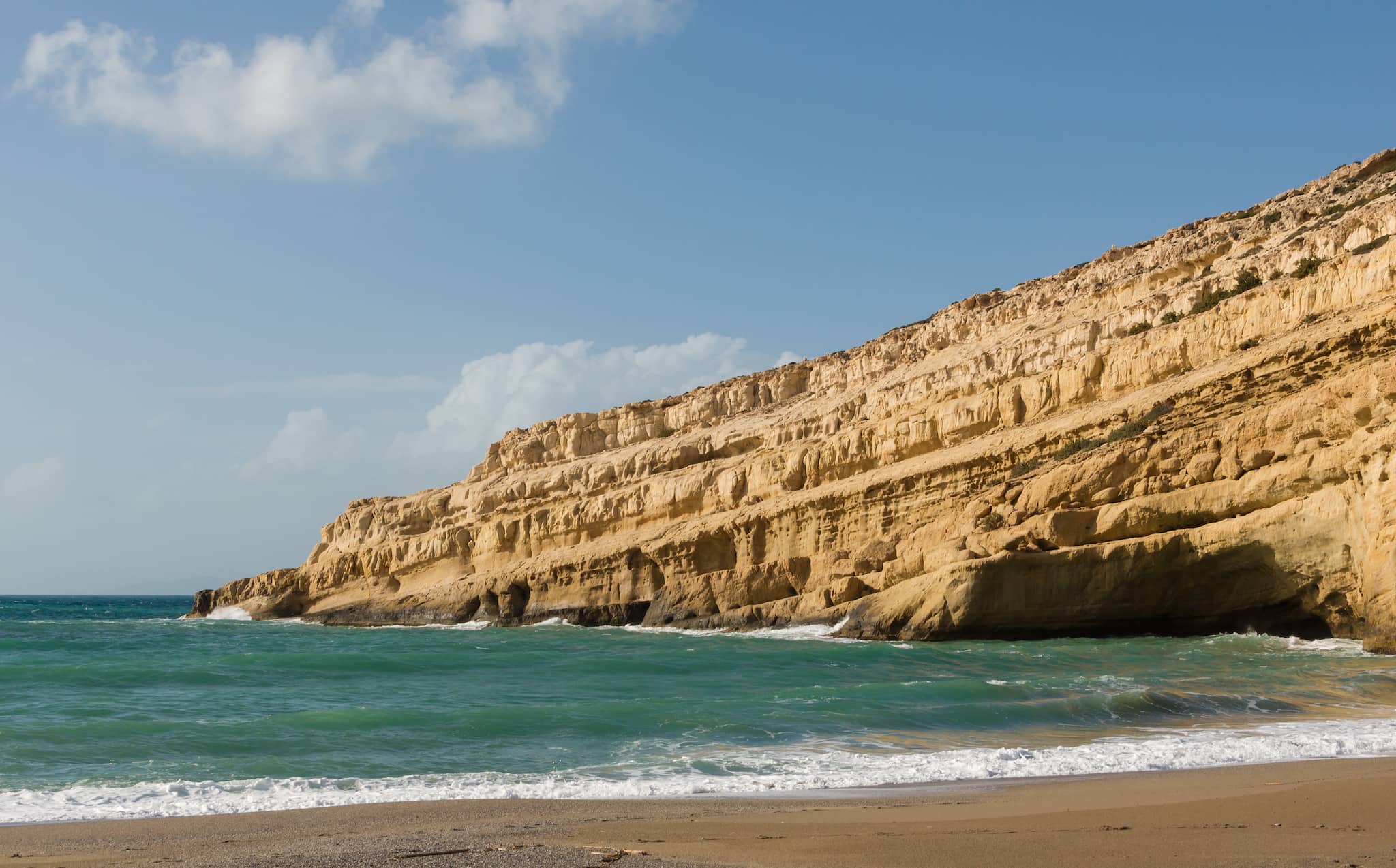 Sunny skies, azure blue, crystalline waters, glorious soft sands, awe-inspiring surroundings… Life is indeed very good on the beaches of Crete. What’s more, there are dozens of them, all in their own way spectacular. Take your pick as your mood strikes you!

Get your vehicle of choice from Europeo Crete Car Rent -a well-established company with guaranteed low prices, stellar customer service and a vast choice of Crete Car Rent to suit different preferences, party sizes and budget considerations- and start exploring.

This month’s Europeo Crete Car Rent blog post shall take you to one of the most iconic seaside locations in Crete, Matala. Since we’ll be travelling in the Phaistos municipality, it is also worth venturing to Kommos: A magnificent sun-drenched stretch of sand -actually one of the largest in Crete- which was once the ancient port of the Minoan city of Phaistos.

Located 75 km south-west of Heraklion, in the community of Pitsidia, this small fishing village was the international hippy headquarters back in the 1960s and the 1970s. With good reason. Featuring a network of artificial caves chiselled on the cliff, Matala boasts a dazzling, one of a kind scenery. No wonder then this striking sight cast a spell on the young and restless globe trotters of the time travelling all the way from America and Europe, to India Nepal and Afghanistan. Canadian singer-songwriter Johny Mitchell was, in fact, one of them; and two of her greatest hits, “California” and “Carey” spoke about her “redneck on a Grecian isle” experience in Matala. But then again Matala had always held a special allure for gods and mortals alike: According to mythology, its beach was the site of Europa’s seduction by Zeus: As the story goes, the omnipotent ruler of heaven and earth spotted the beautiful Phoenician princess playing with her companions, fell in love instantly and then, disguised as a magnificent white bull, managed to abduct her. He crossed the sea with Europa on his back and brought her to Matala. There he revealed his true identity. They made love and in turn, Europa gave birth to King Minos and became the first queen of Crete.

Myths and legends aside Matala also sports a fascinating history that is lost into the depts of time. In the Minoan era, Matala served as the port of Phaistos. In 220 BC., it fell into the hands of the Gortynians, while during Roman times, it became the port of Gortys, a city which rivalled even Knossos in splendour and riches.

Matala owes a large part of its fame to its trademark caves that date as far back as Neolithic times. According to some historians, these were used as tombs in antiquity, but it is rather more likely that they constituted living spaces, considering their size. One of the caves is called “Brutospeliana” as according to legend it was once the stomping ground of the Roman general Brutus. Until the 1960’s Matala was a quaint, sleepy fishing village. Then the children of the flowers took over. Joni Mitchell, Janice Joplin, Joan Baez, Bob Dylan and their cronies; artists, bohemians, intellectuals and all those who had been previously partying at Woodstock, used to spend their days and nights under the star-studded Cretan sky, living in the caves of Matala. Alas, they were eventually driven out by the church and the military junta. Nowadays Matala bears little or no resemblance to the paradisiacal hippy playground that it once was. Still, it is worth visiting to get a glimpse of the past glory, have a beer or two, exchange stories with the few remaining hippies and of course discover the legendary caves.

Just 2km north of Matala, within walking distance from the scenic village of Pitsidia, Kommos is a well-kept secret among those in the know. A long and wide spectacular beach, one of the largest and most unspoiled in Crete, framed by dunes, with fine, soft sands and tamarind trees, Kommos is a tranquil haven for naturists and peace and quiet seekers. Uncrowded and unspoiled even during the busy season, Kommos is also home to the giant sea turtle Caretta -Caretta. That is why parties and camping are forbidden; thereby keeping the spot’s pristine beauty intact. Though the water is cool and crystal clear, the few lucky visitors get rewarded with to die for views, too: A 360o glorious panorama consisting of the uninhabited isles of Paximadia, the Sphakianes Madares range, and the legendary Mount Psiloritis, unfolding in the horizon.

Kommos also boasts marked archaeological importance: It was the ancient port of Phaistos, continuously inhabited until Roman Times. Findings from the antique Minoan haven are located a couple of meters away from the beach and include a temple, a prytaneum, a circular building and a court with four square altars. The most important discoveries date from 1.500 B.C. and are displayed at the Archaeological Museum of Herakleion.

Building is of course not allowed in Kommos; so there is just a small, inconspicuous, and befittingly laid back, hippie style, beach bar at the end of the beach.

Can’t wait to explore Crete’s amazing beaches? The good news is that with Europeo Cars you can book now but pay on arrival. Reservations for Crete car rent may even be made a few hours before your departure through our website or directly by calling our offices. Contact us and make the first step of a journey that will leave you with some bewitching tales to tell!