A concise guide to Knossos by Europeo car hire Crete 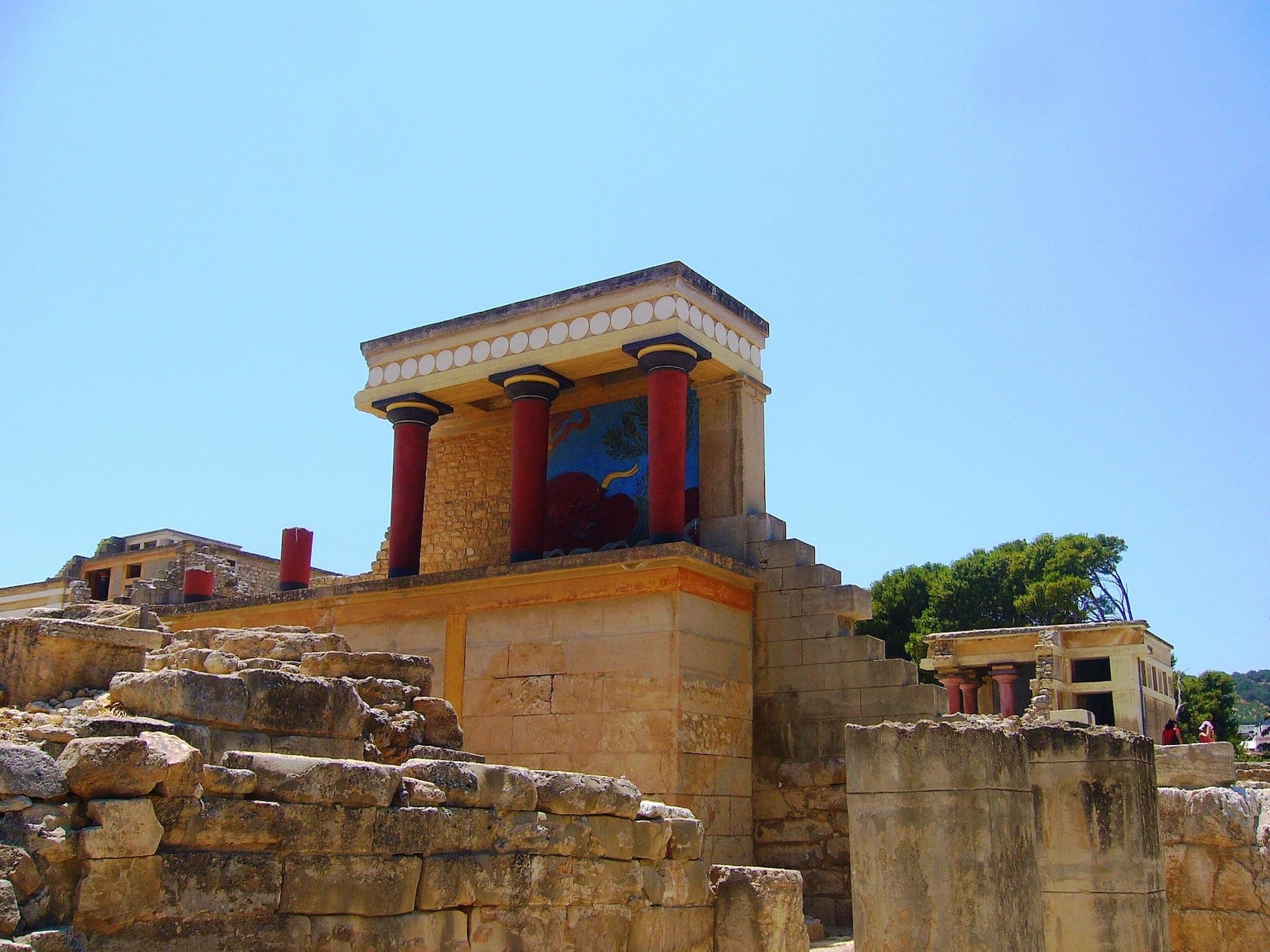 A stunning mosaic of snow capped mountains, rugged coastlines, fertile plains and exotic beaches, Crete boasts a striking natural beauty, which is rivaled only by the richness of its history. One of the oldest cultures of the Bronze Age, as well as Europe’s first advanced society and earliest maritime power in the Mediterranean, the Minoans, named after their legendary King Minos ruled on this island some 4000 years ago. Nowadays, perhaps the most impressive; certainly most famous vestiges of their existence are found in the evocative archeological site of Knossos.

Choose the vehicle that suits your party size, individual preferences and needs amongst  Europeo car hire Crete’s large selection and embark on a journey back in time. Here’s what you need to know beforehand:

Originally discovered in 1878 by Cretan archaeologist Minos Kalokerinos, this monumental complex was further excavated by Sir Arthur Evans from 1900 to 1930. Parts of the site were controversially restored by the famed British archaeologist and his team including artists Piet de Jong and Emile Gilliéron, yet Knossos, surrounded by vines and olives is nothing short of eye- and imagination- catching.

How to get to Knossos with a vehicle from Europeo car hire Crete:

Book your vehicle of choice from Europeo car hire Crete, pick it up at your convenience from the airports or the city centers of Chania and Heraklion; then once in the Cretan capital head southeast following the signs to Knossos Palace. The main road to the site is Knossos Avenue whilst parking is free.

Homer wrote in his Odyssey: “Among their cities is the great city of Cnosus, where Minos reigned when nine years old, he that held converse with great Zeus.” A wise and just king, Minos, give his name to the people of Knossos and to Crete’s splendid ancient civilization: The Minoan. Knossos, which has been linked with Plato’s mythical lost Atlantis and perhaps most famously with the myth of Theseus and the Minotaur, was established well before 2000 BCE and was destroyed, most likely by fire (or a tsunami) around 1700 BCE.

Facts and fiction blend in the case of Knossos: As the legend goes King Minos hired Daedelus to design his palace. The famed Athenian architect, mathematician, and inventor created a labyrinth in order to house the mythical beast -half-man/half-bull- that was the Minotaur. Yet to prevent him from betraying the secrets of the palace, the mighty king locked Daedalus and his son Icarus in a high tower where he kept them prisoners. Daedelus fabricated wings out of wax and bird’s feathers for himself and his offspring; alas while he managed to escape, Icarus, who flew too close to the sun, got his wings melted, fell and died. As per the Minotaur; the monster–child of Minos’ wife thrived on human sacrifice and to appease him Minos ordered the slaughter of the noblest Athenian youth. Theseus, the heroic king and co founder of Athens, was to put an end to all this by killing the ferocious beast with the aid of Minos’ daughter Ariadne.

Though this prevalent story casts Minos into an unfavorable light, one must take into account that it has originated in the rivalling city of Athens; where he was indeed considered a tyrant- with good reason at that. Historical evidence on the other hand suggests that under Minos’ rule, Knossos flourished through maritime trade as well as overland commerce. King Minos moreover was credited with the invention of a light and speedy vessel with which he managed to get rid of piracy plaguing the Aegean at the time. A sage king who was to be appointed as one of the three judges of the underworld, Minos succeeded in unifying Crete which in his epoch became a single centralised state.

Excavations reveal that Knossos was destroyed and rebuilt at least twice. Created c. 1900 BCE the first palace seems to have been massive in size with very thick walls, most likely for defensive purposes as the island then was not governed by a centralized authority.

The culture of Knossos however prevailed in the years to come, so the second palace which replaced the original after its destruction in 1700 BCE, was grander, more intricate and sophisticated in style, albeit less bulky. This palace had four entrances, one from each direction, all leading to the central court. Interior corridors were dark and circuitous, and this gave rise to the story of Minos’ labyrinth. The palace also featured a particularly impressive throne room, most probably ceremonial and religious, rather than hegemonic, in nature.

The city of Knossos, as almost every other community centre on Crete, was destroyed by a combination of earthquake and the invading Mycenaeans c. 1450 BCE with only the palace spared. The eruption of the volcano on the nearby island of Santorini in 1600 or 1500 BCE also played a role in the demise of the Minoan civilization; while the great fire that erupted c.1375 or c.1300 BCE demolished what had remained.

Until the late 19th century Knossos was considered a city of legend and folk. In 1878 while Crete was still under Turkish rule wealthy art lover Minos Kalokerinos discovered the site. A series of excavations led by Sir Arthur Evans in the following decades brought to light an intricate palatial complex which was attributed to the Minoans. Uncovered frescoes depicting the Minoan sport of bull-jumping, during which the male athlete becomes one with the bull as he vaults over the bull’s horns, even lend some credence to the story of Theseus and the Minotaur, when interpreted from a cultural perspective.

Spanning over 35 years Evans’ work, howbeit controversial, paved the way for all future archaeological and anthropological studies of antiquity’s great civilization. Easy to reach with a rental vehicle from a trusted source such as Europeo car hire Crete, Knossos nowadays captures the imagination of visitors from all over the planet.

The archeological site is open daily from 8am to 8pm in the summer; and from 8am to 5 pm in the winter. To beat the crowds get to Knossos either bang at 8am or later in the afternoon. In any case reckon in at least 3-4 hours to do it justice. Having your own vehicle from Europeo car hire Crete means that you get to stay a few steps ahead of the arriving tour buses. To avoid the tourist hordes a good idea also is to visit during the less busy, off season months. Take advantage of Europeo car hire Crete autumn & winter offers to gain in more ways than one.

Combine this trip with a visit to the Heraklion Archaeological Museum to admire the world famous frescoes of proud and slender young men and women in vivid shades of terracotta, yellow, and blue; as well as the enigmatic Phaistos Disc whose yet to be deciphered symbols have caught the attention of linguists, cryptographers, and lovers of a good ancient mystery, alike. One space complements the other and this way you get a more complete picture of the Minoan civilization.

Whether permitting you may combine your visit to Knossos with swimming at the nearby beaches. Gournes, Gouves and Kokkino Hani are some of the options; and are full of beauty and charms.