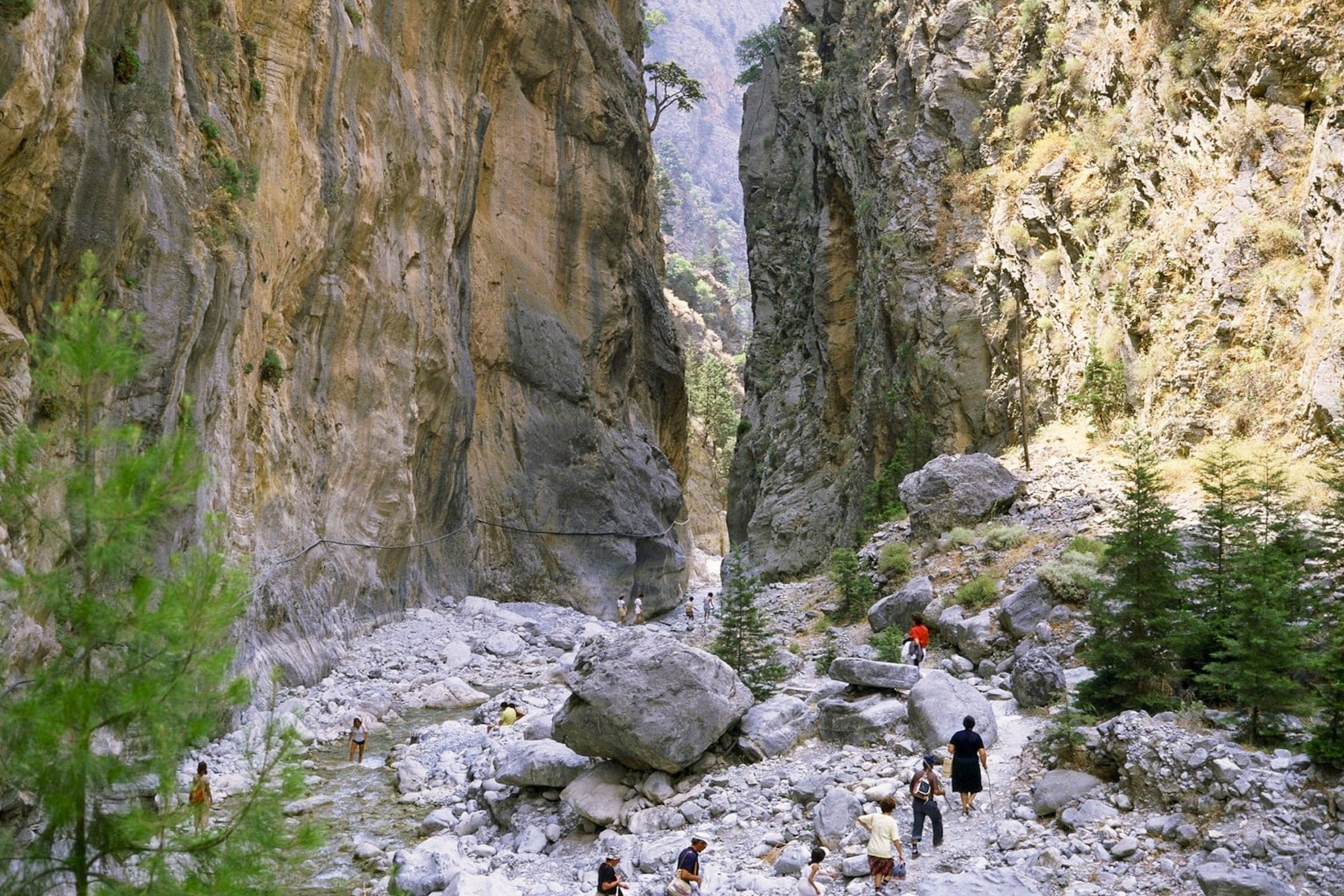 Not one, but myriads are the reasons for which Crete is one of the greatest year-round holiday destinations in Europe: Sunny weather, perfect for topping up your Vitamin D levels, exotic beaches, untouched villages, Unesco monuments and sites, celebrated food and drink and a striking, ever-changing scenery that beckons the explorer within, to mention but a few. The best way to take it all in, at your pace, as you please, is, of course, with your vehicle of choice from Europeo car rental Chania and its wide collection of economy small cars, medium & large cars, jeeps, mini buses, station wagons, minivans and automatics.

And though your travel plans might be impacted right now, we’ll continue to share stories and insights about Crete’s wealth of wonders, to fuel your wanderlust and inspire your next adventure. The present Europeo car rental Chania blog post will take you on a journey to the world-famous Samaria gorge, and the lesser-known, albeit equally fascinating gorge of Aradena. Crete is Europe’s gorge-hiking central and both of the aforementioned make for medium difficulty, yet highly rewarding trekking experiences in Crete: The kind that leaves you with some enchanting stories to share. The good news is that to partake, you don’t need to be especially athletic, an ardent risk-taker or an adrenaline junkie. Just fit enough, with a healthy dose of boy -or girl- scout spirit.

Legend has it that it was Zeus’ thunderbolt which split the earth with such astonishing force so as to create “Europe’s Grand Canyon”. This might not be strictly true as other places share the same claim to fame. Yet, tucked as it is amidst the 2,000-plus metre White Mountains of West Crete, running at 18 km length, the river gorge of Samaria, is surely one of the mightiest and most dramatic in the continent.

Starting at a height of 1,230 meters from the island’s rocky crests, Samaria goes all the way down to quaint Agia Roumeli in the Libyan Sea. The descent takes about 5-6 hours and it does require cautiousness. Yet you’ll be surrounded by abundant natural beauty along the way: Cypress, pine, maple and oak trees, peonies, sage, chamomile and wild herbs growing profusely in the cliffs’ nooks and crannies, releasing their scents with the slightest touch. You’ll also get to admire the trademark Cretan wild goats. At least from afar as the endangered Kri-Kri species is quite shy and reclusive. And if you are super lucky you might even catch a glimpse of some of the rarest birds on the planet: The majestic golden eagle (Aquila chrysaetos), the griffon vulture (Gyps fulvus) and the lammergeier (Gypaetus barbatus). Samaria was once one of the hiding spots for allied troops and resistance fighters, so on route, you’ll pass from the remnants of deserted WW2 shelters, but also Byzantine temples, Christian chapels and Venetian fortresses. At the end of this epic hike, you’ll be recompensed by the deep blue, cool waters of Agia Roumeli and the much-needed sustenance provided at its various eateries and cafes. How to get there with your Europeo car rental Chania

Samaria is about 40km from Chania Town. Pick your vehicle of choice from Europeo car rental Chania, drive to Omalos and park there. Walk through the gorge all the way down to Agia Roumeli, take the ferry to Sougia and then take a taxi back to your car from Sougia (about 40 minutes drive).

Travelling to Aradena gorge with your Europeo car rental Chania

Located in the prefecture of Chania, in the Sfakia region, Aradena at 15km length is one of the longest, and that’s not to mention fascinating, gorges in the country. In fact, thanks to its size, Sfakians used to call it Faragas (huge gorge); however, nowadays this title has been passed on to the gorge of Samaria. Aradena actually starts from the peak of Thodoris in the southern slopes of the White Mountains. Yet the easiest way is to reach it from the homonymous village in the middle of its course. This is where most visitors choose to enter or exit the gorge, so it is widely perceived as being merely 7,5 km in length. Featuring steep surrounding cliffs and scenic views of the Libyan Sea, Aradena forms a deep cut to the small beach of Marmara, west of the quaint coastal village of Loutro. The hike between the popular Aradena village-Marmara beach section (or vice versa) takes about 2-3 hours, amidst exotic flora and fauna: Cliff dwelling flowers, many of them endemic to Crete and some quite rare animals, including bearded vultures and Kri-Kris. Yet while not particularly long, this walk is not for the inexperienced, nor for the faint-hearted. Several passages are quite tricky and trekking becomes somewhat more difficult than at the busier Samaria gorge. So you’ll need a good deal of agility, walking experience and a head for heights, to brave it out.

The village of Aradena (your starting or finishing point) is very interesting in itself. Abandoned in the 1950s thanks to a vendetta allegedly over the ownership of a goat’s bell (!), the settlement exemplifies traditional Cretan architecture, with old buildings attesting to the skill of local craftsmen. In 1986 the village was connected to Anopolis and the rest of the area’s road network via a spectacular bailey bridge that spans the deep gorge. This is also used for bungee jumping. In fact, it is the second tallest bungee jumping bridge in Europe, should you be inclined towards extreme sports! Your hike starts (or ends, depending on your direction), before the said bridge at an old stone path, next to the scenic chapel of Astratigos (Michael Archangel). The gorge leads to the gorgeous Marmara beach where swimming in crystalline waters is in order. Getting there with your Europeo car rental Chania

The gorge can be crossed either from its lower entrance, at Marmara beach, or from above, at Aradena village. Your best bet is to drive to Chora Sfakion and park your car there. Then you shall either take a taxi to Aradena village, walk down to Marmara beach and pick up a boat or water taxi back to take you back to Chora Sfakion where you’ve left your vehicle; or vice versa.